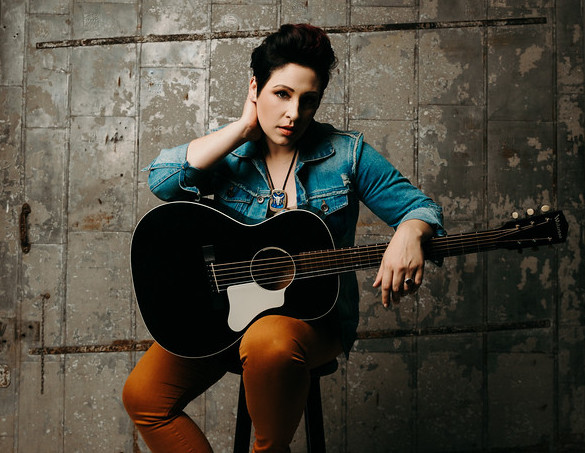 Sarah Peacock:
American history is blood-stained with the dehumanization of entire communities. Casting her own harrowing spell, singer-songwriter Sarah Peacock draws parallels between current events and the 1692 Salem Witch Trials with the title song to her new record, Burn the Witch (March 27, 2020). Finger-picking guitar work cleanses the throat as her voice swells to mimic the havoc strewn through time, as well as present-day strife along our southern border. Such raw intensity boils over onto the rest of the 11-track record, and while her style is not easily defined, her storytelling prowess is irrefutably potent and unnerving.

“Hopefully, this song inspires people to take a look at what’s happening in our world today and how we abuse people,” she says of the song, which is delivered as a “catalyst for hope.”
Peacock has a bedeviling way about her, particularly in the way she harvests such influences as Brandi Carlile and Heart. She even filters heavy metal band Metallica through a rootsy, acoustic lens to emerge with a silky, sticky musical web of her very own. “Keep Quiet” slithers from her bones in a similar sinister fashion, twisting her lyrical mechanisms even tighter, while “Mojave” flourishes with a vibrantly polished hook. Her voice always rises to the occasion -- switching between various styles as effortlessly as a chameleon.

Firm in her belief to use her platform for social and cultural change, the shift occurred after her tour bus burned to the ground in 2016. Then on a four-month tour, weaving up the west coast, she and her crew stopped for a quick bite to eat. Their generator caught fire and the blaze consumed nearly everything aboard.

“After the fire, I signed with a Nashville label when I came home from the tour. I did two records for American Roots Records prior to parting ways with them in the fall of 2018. There was Beauty in the Ashes (2017) and then Hot Sheet Motel (2018). I think the connection piece and synergy between the bus fire and Burn the Witch was that the bus was a pivotal moment where I realized people really were listening. The fans showed up for me when I was ready to quit, and that made me internalize (probably for the first time) that the world was actually paying attention. I started writing differently. I wrote like the fate of the social climate depended on it. Burn the Witch is what happened after really letting the juices of that experience and those last two records soak in. It’s about the music, the songs, and the power they have to plant a seed of change.”

Burn the Witch is a brawny, life-affirming set that digs into themes of perseverance, overcoming personal struggles, finding redemption in the ashes and what freedom should feel like. “The Cool Kids” recalls being bullied in school and the idea that “hurting people tend to hurt people,” she says in hindsight. “I feel sorry for all those kids who picked on me.”

“I remember Billy Shane / Got beat up ‘cause he was gay / There’s worse things than sticks and stones / Bones will heal, but a heart just won’t,” she sings. Such a raw lyric is one of many essential pillars to Peacock’s latest opus, also accentuated with songs like “House of Bones” (“It’s a hell of a thing to do / Carve your heart out with a spoon”), the rain-soaked “The One” and “Take You High,” which offers a welcome reprieve of optimism and warmth.

A product of the Atlanta suburbs, growing up in the town of Lawrenceville, Peacock did what most youths do: she performed in the church as part of band and choir, as well as in stage musicals in high school. Forbidden to listen to any secular music, it wasn’t until much later that she sought out popular music like the Beatles, Led Zeppelin, Queen, Fleetwood Mac, Johnny Cash, Linda Ronstadt and country icons Dolly and Reba.

In 2001, she left for Belmont University in Nashville to study commercial music. Her mid-20s evolution directly stemmed from flipping through catalogs of Top 40 country and pop-rock, while still drawing upon a heavily contemporary Christian music songwriting foundation. Her discoveries in rock ‘n' roll music soon fused with her own burgeoning craft, and she later spent a few years teaching at a music school for kids in Atlanta -- helping to build a curriculum that spanned ‘60s and ‘80s music to the present.

Meanwhile, as her musical endeavors expanded, she underwent a vital personal transformation.
“A huge factor for me in coming to grips with my faith and sexuality was that I discovered the progressive Christian community during this time,” she recalls. “I learned that what I was told to believe about the Bible and the LGBT community isn’t exactly what the Bible really says when you read it with the full scope of the original text and a full understanding of the social and religious culture of the time. I was told that you couldn’t be gay and a Christian. Discovering that God really did make me who I am on purpose and learning that He didn’t want me to change gave me the freedom to be who I was more comfortably.”

An active touring musician since 2005, she met a smorgasbord of people who showed her the full breadth of what love and compassion meant.

“I was finding these people opening their homes to me and preparing meals for me and just loving me,” she remembers. “They were good, solid, generous, kind people, and that really opened up my viewpoint, not to mention in a parallel way, I was discovering how to reconcile my faith and sexuality.” It took Peacock a good seven or eight years “to come to terms with and live comfortably in my own skin and find my voice and sense of belonging, as a woman in the business,” she says.

Causing even more emotional friction for her was an ongoing mental health battle. “I was feeling like who I was was so innately wrong that I simply didn’t want to exist anymore,” she says. “Having to come to terms with it all, there was no alternative for me. I wouldn’t be here today if I didn’t invest in personal growth and in a spiritually-heightened awareness.”

At the time of the bus fire in 2016, everything came to a head. It was a turning point not only for her personal development but for her music as well. Burn the Witch is Peacock at her most vulnerable, and yet there rises a great strength within her songwriting. She’s unafraid to confront social issues of being a queer woman in 2019, bullying, and displaying unconditional compassion. “Hold Me in Your Heart” is an astonishing acoustic-rooted moment and quite a wallop of a performance to bookend what will undoubtedly be one of 2020's most important releases.

These 11 songs seek to uproot what we think we know about the world. Peacock works her magic across every single moment, each syllable diligently carrying its weight and heart. The music is expertly packaged and delivered with a sense of urgency while never feeling heavy-handed or exploitative. Her eighth album, Burn the Witch, is about truth and understanding of humanity, and Peacock will not back down until the whole world is listening.