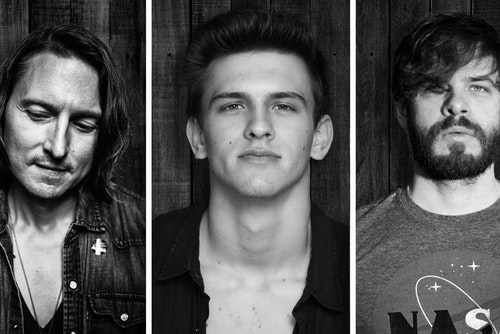 Years before he teamed up with Grammy-winning producer David Bianco (Tom Petty, Bob Dylan, Bruce Springsteen, Lucinda Williams) for the Heart of My Hometown sessions, Szlachetka was the frontman of acclaimed LA-based roots-rock band the Northstar Session. With the band, he recorded five albums and appeared in NBC’s TV series Parenthood. He began his solo career in 2014 releasing Waits for a Storm to Find. Three years later, Heart of My Hometown shines new light on Szlachetka as a singer, prolific songwriter, storyteller, and fiery lead guitarist. It's an album whose touchstones include the charged roots-rock of Tom Petty and the warm, acoustic sounds of Jackson Browne. Szlachetka moves between both ends of that spectrum with ease, splitting his time between full-band anthems — including the riff-heavy "Until That Echo," co-written with Train's Scott Underwood — and more intimate, acoustic moments like "Wildflowers on the Highway," featuring an appearance by duet partner Katelyn Clampett. The album's title track rests somewhere in the middle, layering pop hooks and three-part harmonies into a nostalgic song about remembering one's roots. It's an album built for road trips, slow dances, wild Friday nights, and everything in between.

Leon Majcen is a folk-rock singer/songwriter currently based in New York City with diverse influences that span folk, blues and country as well as alternative rock. His distinctive vocal tone, dynamic guitar playing, and a lyrical depth beyond his years deliver fresh appeal to the Folk/Americana scene.

Born in Prague in 1999 to Bosnian immigrants who moved to the U.S. when he was two years old, Leon was raised near the sandy beaches of Clearwater, FL. His early experiments in songwriting came following the gift of his first guitar at the age of nine and were inspired by the laid-back atmosphere of his hometown paradise. His exposure to live music as well as classical, folk, and rock genres throughout his childhood continued to shape his style which is now largely influenced by artists such as Bob Dylan, Tom Waits, and Johnny Cash, as well as the writings of Charles Bukowski. He quickly developed a love for songwriting nurtured by a music-loving family, and started playing open mic nights at local coffee shops. As he developed his artistry, he began to play in front of larger audiences at notable Tampa Bay venues like Straz Center, Raymond James Stadium, and listening rooms The Attic at Rock Brothers and The Hideaway Cafe. He played Tampa Bay-based Whigfest with Tyler Childers and Trampled by Turtles in February 2019 and North Carolina Brewers and Music Festival in May. He has opened for Amy Helm and Striking Matches (Nashville) and this is his first tour in support of the latest release, NUMB.

After his first single, “Love and Misery”, was released in 2016, it went into rotation on SiriusXM’s The Coffee House channel and quickly racked up over 300,000 plays on Spotify, fueling the release of the “Love & Misery” EP in 2017. He moved to NYC in the fall 2018 shortly after releasing his first full-length album, NUMB, to study in the music program at NYU.

Bryan Elijah Smith is based out of the Shenandoah Valley in Virginia. With over 1,000 songs penned & 11 independent releases, Smith is creating a self-produced legacy that began with his first song at the age of 18. The music cradles all things ‘Americana’ at heart & at hand without shying away from a truly uninhibited pop sensibility. Crossing a wide array of genres, what gets produced has been compared to the likes of everyone from Bruce Springsteen to Kings of Leon. Smith recently won 2nd place in the prestigious Chris Austin Songwriting Contest at MerleFest 2018 where he was 1 of 12 songwriters chosen out of 1,000+ entries. Smith is touring in support of his latest release ‘In Through The Dark’; currently available exclusively on Vinyl & CD.