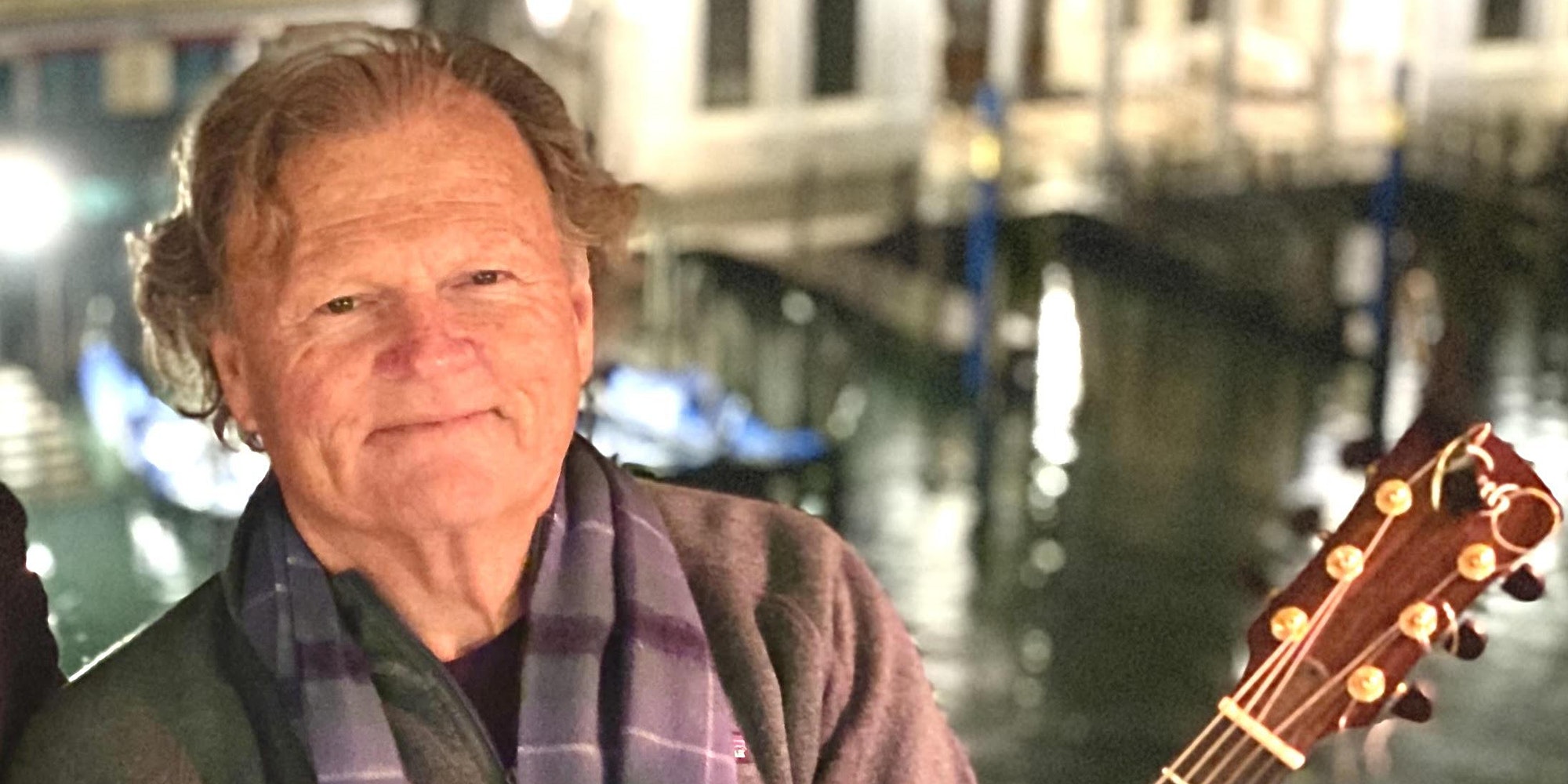 Singer, songwriter, guitarist, storyteller, traveler and road warrior are all words that aptly describe Scott Kirby. Finishing songs while driving through the Italian countryside, performing 100 plus live shows throughout the US and Canada, touring Ireland with 50 fans in tow, and recording his tenth album in Nashville, all keep the barnacles off this modern-day troubadour.
A creative lyricist and accomplished finger-style acoustic guitarist with an expressive voice, Kirby describes himself as a direct descendent of the ’70s singer/songwriter movement. His very first 45 was a Beatles record, and he came of musical age listening to James Taylor and other great songwriters of that era. He has never received any formal musical training, but often credits Taylor with teaching him how to play the acoustic guitar. “If it weren’t for the hundreds of solitary hours in my room in Concord, New Hampshire, with a guitar and a James Taylor book, I never would have learned to play,” says Kirby. Speaking of New Hampshire and musical influences, let’s not forget fellow New Hampshire native Tom Rush who was taking the folk scene by storm in Kirby’s formative years. Coincidentally, Kirby connected with both of theseartists in Key West 30 years later, which is a whole other story.
After a few years in high school bands and a stint in his early 20s as a bass guitarist with a group, Kirby drifted away from music and became immersed in a career in politics: managing campaigns, writing and producing radio and TV ads, and overseeing the office of a leader in the New Hampshire legislature. He was also guitarless for eight years! In 1988, however, after tiring of the political rat race and the length and severity of New England winters, he bought a new guitar, relentlessly practiced his chops, and planned his escape. Six months later Kirby was living in Key West and performing five nights a week on a balmy beach facing the Gulf of Mexico.
Kirby started writing songs after some inspirational late-night words from legendary songwriter Shel Silverstein and further encouragement from Peter Mayer, who had just joined the Coral Reefer Band. A year later he found himself recording his first CD, Too Damn Yankee, in Jimmy Buffett’s Shrimpboat Sound Studio with Peter and Jim Mayer and Roger Guth. “This was a very lucky break for me, but I was in a bit over my head,” says Kirby. “Peter, Jim and Roger were incredibly patient with me and it was a fantastic learning experience.”
Between 1993 and 2006, Kirby continued to write new material and recorded four more CDs with Key West producer/engineer Dan Simpson. In 2008 luck struck again when famed drummer/producer Russ Kunkel offered to produce Kirby’s Row Me Home CD at his studio in Los Angeles. “Next thing I know I’m cutting my songs in the Hollywood Hills with Russ, bassist Leland Sklar and guitarist Dean Parks and feeling like the luckiest guy in the world.”
Speaking of luck, Kirby’s wistful ballad “Lucky Enough” struck a chord with listeners on Sirius/XM Radio Margaritaville, which exposed his music to more markets around the country and led to his current touring schedule through 35 states each year. He continues to receive regular airplay on the station.
Kirby joined a group of friends in 2011 to open the Smokin’ Tuna Saloon, a 200-seat bar and music venue in Key West, where Kirby often performed in the winter months. The Tuna is also host to the Key West Songwriter’s Festival, which has exploded into the largest event of its kind, in the world.
In 2013 Kirby released his seventh CD, Sol Searching, a collaboration with producer/engineer/musician Lew London. “Lew was great to work with as he’s so multi-talented,” says Kirby. “He performed for years with Steve Goodman and is such a fine songwriter in his own right that he really understands how to build a sound around acoustically-based songs.”
Scott Kirby's eighth CD, La Casa Cayo Hueso, was a live collaboration with occasional bandmates, Brendan and Peter Mayer.  His ninth effort, Chasing Hemingway's Ghost, was recorded in Nashville with producer Andy Thompson in 2017.
When it comes to songwriting, Kirby respects authenticity and counts on everyday life and his coastal roots for much of his inspiration. “I don’t wake up every day thinking about writing the next commercial hit,” says Kirby. “Songwriting for me is about telling stories, expressing emotions, and commentary on things I may find funny or absurd.”
Over the years Kirby has shared the stage with some of his favorite artists: Carole King, Jimmy Buffett, Tom Rush, Mac McAnally, Darius Rucker, Livingston Taylor, Marty Stewart, Asleep at the Wheel and others. When not on the road or performing in Key West, Kirby splits his time between Key West and the coast of Maine, where he can often be found sailing, a lifelong passion of this descendent of Newfoundland fishermen.  He’s also recently discovered a little town in Southern France, where he plans to lay his head a month or two each year.
Yes, Scott Kirby is- as he readily admits- lucky enough.