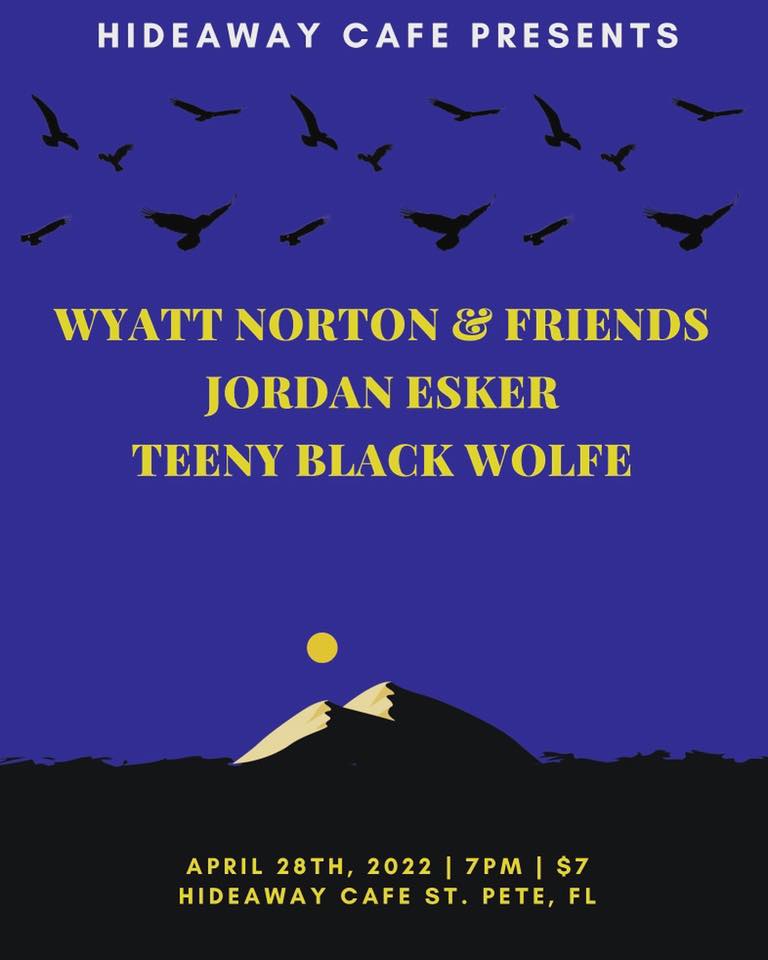 Join us at one of St. Pete's truly most beloved and respected venues, Hideaway Cafe on Thursday April, 28th to witness performances from three adroit Tampa Bay artists. The evening will start with the sweet and eerie tunes of talented St. Petersburg songwriter Teeny Black Wolfe followed by a special solo performance of Tampa Bay's renowned Jordan Esker of 'JE and the 100 Percent.' As an evening cap to keep the spirit of rock n' roll alive on Central Avenue we have St. Petersburg songwriter Wyatt Norton accompanied by his brother Toby Norton on guitar and vocals, John Ewing on bass and Patrick Martyn on drums. More information and artist bios below.

Wyatt Norton is a St Petersburg, Florida based musician and songwriter. After writing his first song at age 10, he never lost the love for harboring his thoughts into songs and showing them to those who will listen. While blending sounds of Alt-Blues, Americana-rock and indie-soul Wyatt writes songs of reflection, human emotion and hope while hinting towards the continuous forward motion to simply keep on keeping on. This evening Wyatt will be backed by his brother Toby Norton on guitar and vocals, John Ewing on Bass and Patrick Martyn on drums.

Jordan met his now wife in high school, when he was 15 and she was 16. However, this love was unrequited for the next 7 years. Over that time, and since they got together, a lot of songs were written about her. In this solo appearance, Jordan will be playing the best from all of those songs and telling stories about them. Starting as the multi-tracking recording project in Tallahassee, FL that created his album “Best Supporting Actor”, Jordan formed The Hundred Percent to bring these recordings to a stage.
The group that formed—Emmit Dobbyn (Bass), Vincent Montemarano (drums), Matt Raspo (keys)—has since toured the southeast multiple times, played Gasparilla Music Fest 2019, and opened for various touring artists.

They’ve released three albums. 2021’s PICA spanned the band’s silly funk in “Bored Again” and “Promise to the Anonymous” to dark electro soul in “Won’t Sit Down” and “Never Gave Back”. But the music is just the backdrop for the band’s most topically clear lyrics to date: on feeling the loss of time and possibility to dedication.
On March 18, 2022, the band will release a new electro-ballad single: “Thinkin at Night.”

Cosmic Americana artist, Teeny Black Wolfe, tells of heartache, defiance and simple pleasures through poetic storytelling and a voice that is equal parts porcelain and Appalachian blue dirt. Often described as a grittier version of Dolly Parton, Teeny considers her songs to be simple honest confessions that find beauty in the hard times and life’s mundane moments.