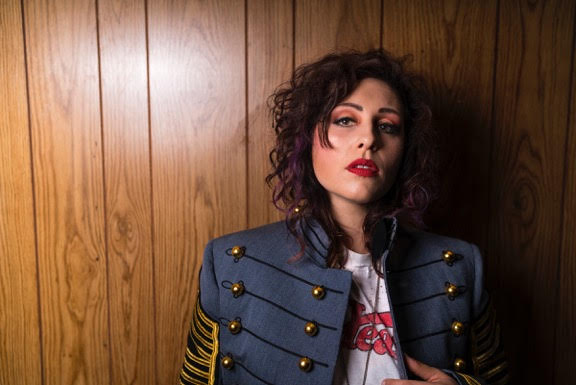 If you think Wonder Woman is a badass, then you’ll definitely want to meet Sarah Peacock. 1.2 million miles, 2,800 shows, and fourteen years of nonstop crushing it while flying solo is one heck of a road trip. Sarah Peacock bridges gaps between Country, Blues, Americana, and Rock-N-Roll. Her music is raw, truth telling, and fiercely unique. Essentially, at all times, Peacock is victoriously defeating the forces of evil with glorious Amazonian strength and valor.

Held hostage by a record label at 21, the troubadour life came with a rude awakening for the young Georgia native. Peacock made her home in a ‘92 Volvo with her dog and a guitar, and for nearly seven years earned a living in the corner shadows of American dive bars.

The tables turned in 2011 when an anonymous fan helped her buy out her recording contract. Since then she has released six albums, winning multiple awards for her songwriting. “Hurricane” won Best Song in the American Songwriting Awards, and “Beautiful” was a winner with International Unsigned Only. “The Cool Kids,” and “Are We There Yet” have nominated her for Best Female Artist and Best Song in a number of songwriting competitions. Peacock was also named Listening Room Network’s Artist of the Year.

But the dark side takes another swing in 2015. And, big Nashville promises are especially good at grave digging. From RCA Studio A "project golden child" to street orphan practically overnight, Peacock was ghosted by her entire team and producer without explanation. Spirits crushed, she hit the road. Solo. Again. That was the catalyst that launched her next album, “Dream On,” and landed Sarah her first tour bus. But less than 4 months later, she was watching it burn to the ground at a California truck stop. Sarah’s fans quickly came to the rescue with a fundraiser, which is what kept her on the road. That special connection between Sarah and her fans is what put her in Hank Williams Jr.’s former tour bus, one year after the devastating loss. “You have to be unstoppable, even when you don’t believe you are.” That’s the Modus Operandi for the now half Tennessean, half Texan road warrior.

When she’s off the road, Peacock is active in the anti-bullying and animal rescue communities. She helped start a rock school for kids and recently formed her own 501(c)3, The Band Waggin,’ benefiting animal health and rescue programs.

In 2017, she signed with In Tune Entertainment and American Roots Records. Peacock is sponsored by Taylor Guitars, Fender, 1964 Audio, Strymon, and Mississippi Cold Drip Coffee. Her upcoming EP, “Hot Sheet Motel,” is a collection of 5 songs that reveal the secrets of one woman’s journey through the shadows.