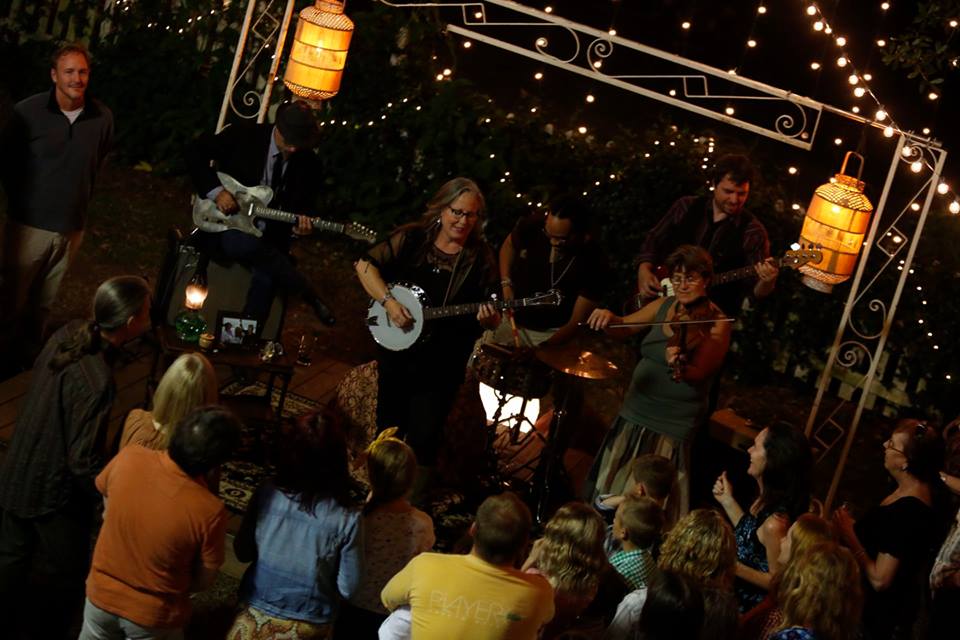 There's a stretch of road down in South Florida that's seared in my memory.  Highway 27 headed north, just shy of Clewiston. It's a stretch of road most folks avoid; slow and winding. Visually it's not much to speak of; a daisy chain of desolate towns surrounded by sugar cane fields, suffocating expanses of palmetto and scrub.   It was in the middle of one of those cane fields that I first heard Terri Binion sing.

I was doing a run of shows with Vic Chestnut, the first of which was down in Orlando. It was well attended by Florida standards---maybe 150 people. End of the night, walking out the side door as I loaded out my gear, this woman approached me and introduced herself as Terri. She chatted with me like I was just another Joe. It was a pleasant conversation.

The gear got loaded and I said I had to go. She shook my hand firmly, then offered me a CD she said she'd made.  Her tone was dry, her delivery crisp---no brag, just fact. This happens a lot on the road.  Everyone wants you to listen to their homemade CD.  Some are so bad you can't get through much more than the first few notes. Occasionally you get a good one that you'd be inclined to sit through twice.  I tossed it in the front seat and thanked her. I didn't take a second look at the record, called Fool, or think much more about this lady Terri, who hadn't mentioned her last name.

I headed out the next morning, following Vic down to Fort Lauderdale for a show that was poorly attended. Despite the small crowd I was given another couple of homemade CDs. The next morning as I bushwhacked my way back up north toward Sarasota I worked through the stack of unsolicited CDs, eventually putting Fool on last. Five, ten miles south of Clewiston. From the first note she had me.  It started off in mountain music territory. The playing was concise, well executed, and the songwriting was shot through with the deep poetry of southern life.  I was already hooked by the time the first chorus hit.  That's when Lucinda Williams joined in, as the back up singer. Yeah, that Lucinda Williams. I listened in disbelief.

I figured there was no way in hell the second song could be as captivating as the first. Well, song two was a quiet ballad, no Lucinda to distract me, just Terri and her guitar, naked and unadorned.  I was all set to dismiss it, but I couldn't. It was a discreet portrait of a poor lost soul, a destitute southern woman, an archetype. By the end I was in tears. It was that true, that beautiful, that perfectly wrought.  Just Terri and an acoustic guitar. Two songs in and it was clear, Lucinda sang on this unknown's record because she understood that Terri was a magic person--someone who not only followed her own compass, but who was guided by stars not visible to the average eye.

The third song spoke of hurricanes and just kicked ass.  As the flatlands of Florida flew by me at sixty miles an hour I heard Terri sing "this southeast prairie will be but a memory/come another hurricane season like this". I grew up in Florida, had seen that landscape a million times, but never once realized what I was looking at until that line. This southeast prairie. Great songwriters do that, they reframe the reality around you so that you see it anew.

The CD stayed in the player for upwards of two weeks. I listened to it dozens of times front to back. No two songs are the same, and yet they all work together.  There are bluegrass stompers, tender country ballads, some odd hybrids that sound almost like show tunes until you catch the line about the murder, the suicide, the prison. And yet set end to end somehow they all make sense.

There's a cryptic coda after the last song; a field recording of an ancient grizzled maniac, playing a banjo tune called "Moon Shine Up On Old Dudley". It details some distant kin of Terri's up in Carter County Kentucky, her great great great something--granddad, uncle, some Binion---taking a shot at the sheriff during a raid on his still.  When asked how old the song was, the old man cackled delightedly then replied, "Don't rightly know. It was here before I was."

Terri grew up steeped in the ways of the South. Her dad hailed from Kentucky, her mom from West Virginia. Terri herself, was born at Camp LeJeune, in Jacksonville, NC, a Marine Base, as her dad spent 20 years in the Marine Corps, but as a young man, was a coal miner around the time he met Terri’s mom. Terri reports he loved digging coal, but Terri's mama feared for his safety, and eventually convinced him to join the military. This was during the Korean war, mind you.

So join he did, and with that, Terri became one of those perpetually displaced military kids. That type of rootlesness leaves a mark on you--I know, I was a military kid too.  You move every couple of years, never get too close to anyone, knowing you'll just have to say goodbye. You play your cards close to the vest and turn whatever life force you have inwards.

Some turn to drugs, some crime, some Jesus. At an early age Terri turned to music. She worked though the usual suspects; Elvis, the Beatles, Creedence, eventually finding her way to Glen Campbell and those Jimmy Webb penned masterpieces: Galveston, Wichita Lineman--landmarks by which Terri would later navigate her own journey as a songwriter.

They settled for a time in 29 Palms, California, out by Joshua Tree.  It was there in the desert that Terri, following her older brother's lead, picked up a guitar and started writing songs. She was all of eleven. Terri continued to struggle, socially in public schools, moving, stumbling, but continued to carry the guitar everywhere she went. Music books and songs, her constant companions.

There were some shaky years, some drugs, some hard times. Rites of passage for a songwriter who intends to have a story worth telling. She traveled, she wandered, taking notes along the way. In her mid thirties she finally made a record. Through a twist of fate Liberty Devitto, Billy Joel's drummer, heard the demos and stepped in to play drums and co-produce Leaving This Town, a record that attracted the attention of music industry folks up in New York City.  This was in the mid 90's. Before long she was opening for the likes of Steve Forbert at top shelf venues like the Bottom Line. Her childhood hero Jimmy Webb caught her act, then promptly dropped her name into a book he was writing about the craft of songwriting.  Jimmy Webb reported that Terri Binion was someone to watch.  She was on her way…or was she?

As I said, this woman follows her own compass. She's not guided by the pack mentality.  She works the back roads of life with no regrets.  Leaving This Town drew the attention of the Indigo Girls, who pegged Terri to open for them, kicking off that tour at the legendary Ryman Auditorium up in Nashville.  And once the tour was over what did she do? Did she move to Nashville, or LA, or New York?  No, she went back to her day job doing wardrobe work down in Orlando. She laid low for a few years, then released her masterpiece, Fool, mysteriously enlisting Lucinda William's help as a backup singer. See a pattern here? Talented folks believe in Terri. She toured a bit on Fool, lost her car in roadside fire, toured Holland, went broke and headed back to her day job. She dressed TV personalities, worked on a few films, rode out long stints of unemployment.  She wrote more amazing songs, lived her life in full, but never made another record.

This time she won't catch me off guard.  We're friends at this point and she's warned me it's on the way.  I'm ready.  But hell, it doesn't matter.  I won't do anything different the second time around. I intend to listen to it exactly the same context as the first, when this lady was a stranger to me. I'll listen in the car, whistling along at good speed down some back road.  And as the first few notes rise up and hit home, I'll remember that place too, just like I do that stretch of highway just south of Clewiston.

I thank you for the gift of your music Terri.