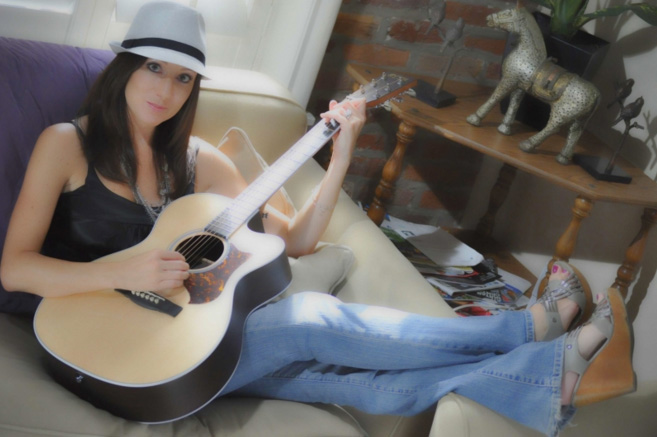 My name is Kate Reuter (pronounced ROO-der), and I am a folk/pop singer-songwriter from Florida. I am a mother of two girls, a wife, a miscarriage survivor, and a cancer survivor. I debuted in 2012 with “Affairs of the Heart”, a love and relationship-inspired album that explores a myriad of emotions through melodic vocals, graceful guitar-playing, and intimate lyrics delivered with a soothing indie style.  Although music was a memorable part of my childhood, I reached a crossroads in my twenties that brought it from the backdrop to center stage.  Picking up a guitar for the first time at age 26, I set out to change my course and “Affairs of the Heart” was born.

At 21, I graduated college with a Marketing degree and was headed for success in the corporate world. I obtained a lucrative position in the pharmaceutical industry and was that well-dressed, smiling ‘pharma rep’ you see driving a nice car to doctors’ offices all over town. It looked like I had it all. However, there was an emptiness inside of my soul. While I had a nice house, a good job, and the love of people around me, there was a nagging feeling that something was missing, something big, and I was determined to figure it out. I quit my job, sold my stuff, and began to peel away the layers of my identity to expose the void. After a tumultuous journey of soul-searching, I discovered the missing piece to my life through music. I had always loved singing as a form of expression, but it was mainly as a hobby. However, that year, the profound impact music had on my healing changed my outlook, and how I viewed my hobby. The fusion of lyrics and melody provided clarity, and songwriting became my vessel for self-expression. I spent all of my free time learning about songwriting and listening to other musicians craft their own stories through live music. I absorbed every ounce of musicianship that I could, and started overlaying guitar chords and melodies with the writings in my personal journal. I bought my first guitar (a ‘Taylor’, which now shares the name with my first-born daughter), and shortly thereafter wrote the song ‘Joy’, which tells the story of this self-discovery.

“Joy” along with six other original songs comprise the debut album, “Affairs of the Heart” (Hideaway Recording Studios 2012), which “feels like a high quality, live performance” and leaves you “with everything you need to fall in (or out of) love all over again” (Backline Music Group). My work that year earned me the honor of runner-up for “Best Local Singer-Songwriter” (Creative Loafing ‘Best of the Bay 2012’) and the opportunity to join songwriter Justin Young (bandmate and fiance of Colbie Caillat) on a Tampa concert stage for the song duet “Puzzle Pieces” during his tour with Trevor Hall and Anuhea.

One year after the release of “Affairs of the Heart”, I was diagnosed with Melanoma while pregnant with my first daughter. It was at this point that I decided to take a break from music  and focus on my health and my family. While it was a difficult decision to step back from my passion, it was also the right choice for me. Despite that life-changing diagnosis, I gave birth to a healthy girl in 2013, and a second daughter in 2015. I remain cancer-free now over three years later. While my family is extremely important to me, the call of my passion has been getting louder, and I have exciting plans for my musical pursuits in 2017 with new songs in development and recording time in the studio underway.