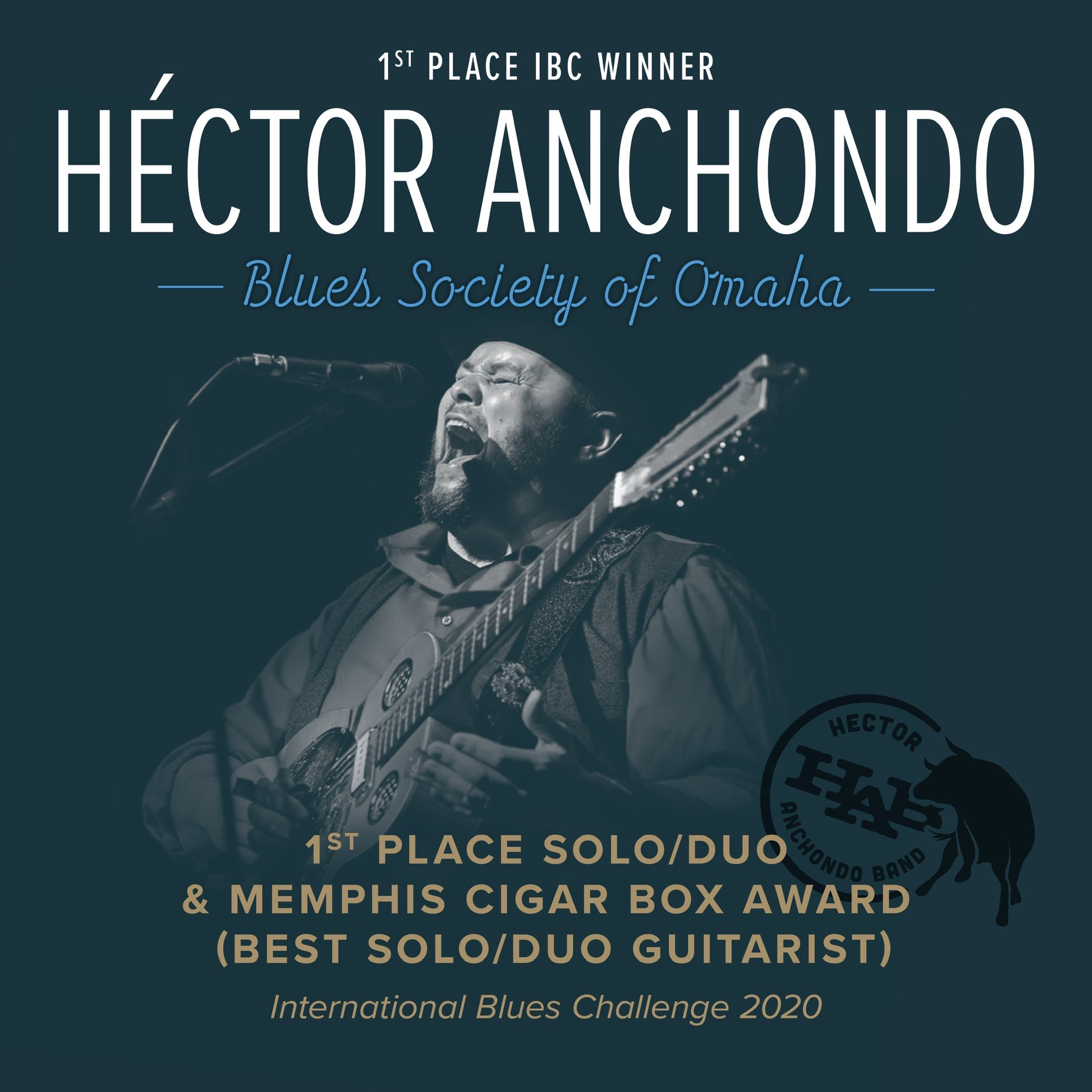 -Finalist in the 2016 International Blues Challenge in Memphis, TN (top 8 of 240 acts worldwide)

-Semifinalist at the 2015 International Blues Challenge in Memphis, TN

For Héctor Anchondo, the third time really became the charmed one. Anchondo entered the 2020 International Blues Challenge in the solo/duo category and came away with the top prize: winning the solo/duo category. He also took home the Memphis Cigar Box Guitar Award for best guitarist in the solo/duo competition, where he performed representing the Blues Society of Omaha. It was Anchondo’s third year performing at the IBC as the BSO’s artist. In 2015 the Héctor Anchondo Band made the semifinals (from about 250 artists down to 50 semifinalists) and in 2016 the Héctor Anchondo Band went all the way to the finals, playing in the top eight bands chosen by judges from the week of performances.

Being a winner in the International Blues Challenge is a prestigious honor. For Anchondo, it was the culmination of over two decades of work. “Winning this feels like reward for having stuck with music for 24 years,” Anchondo says. “I had flashbacks of all the journeys, sleeping on floors, years of sleeping in the van, overnight drives, no pay, credit card debt for the cause, broken-down vans, the list goes on.”

Anchondo’s dedication to music comes from his heart. He spent time in a popular rock band called Anchondo, but all the while the blues was calling him. Finally, Héctor says, “I decided to make the change to what my heart really wanted. At one point in my old band, I started playing more guitar and there were some folks that became upset because I wasn’t sticking to just the songs. That broke my heart and I decided that I was going to do what my heart was asking and switch to the blues and really let my guitar loose.”

He was serious enough about following his calling to move to Chicago for a year, learning from the old- school blues traditions there. “When I started playing all blues, I wanted to make sure I had an authentic sound. So, not only did I move to Chicago to soak up the blues, I also refused to listen to any other style of music for an entire year other than blues. I started on blues then moved to more rock-based. Switching genres later in life, it was important to me to make sure I had a real sound.”

“I’m proud that I never gave up,” Anchondo reflects now. “There were times of self-doubt and even a couple times where I questioned if I should change my path. My love of music and performing kept me focused on the blues path. My goals are to keep pushing myself to be a better musician, to push to keep growing so I can pay my bandmates more. Most of all, to keep making people happy so they can forget about all the day-in and day-out complexities that make up our daily lives.”

Anchondo is endorsed by Delaney Guitars and GHS Strings, and his guitar rack includes a custom guitar recently completely for him by  Mike Delaney. “I’ve been lucky enough to be part of both families ever since I made it to the IBC finals in 2016.”

Anchondo plans to continue touring with the Héctor Anchondo Band while also “doing more solo shows. Even a solo album is in the future. Some tours I’ll have some solo shows mixed in. Hopefully I’ll be able to have the guys play in those too, but in an acoustic setting.”

For now, his wife and pre-school age children are able to travel with him most of the time, something he really appreciates because he put off a serious relationship and a family to focus on his career. Back in Omaha, he’s also the creative force behind his own festival, creating the In the Market for Blues Festival in 2015 with the help of local company E3 Music Management. His inspiration was the jam-packed Beale Street clubs with blues playing up and down the street during the IBC in Memphis. In the Market for Blues has grown exponentially each year with additional support from the BSO and other sponsors. The most recent event boasted over 40 local, regional and national bands at 12 downtown venues.

Anchondo is still following his calling to the blues with heart and dedication. “I’m really exploring my guitar playing and letting go to try and become the best musician and entertainer that I can possibly be.” Of his 2020 IBC win he adds, “This win is for everyone that has stuck with and supported me, never gave up on me and believed in me.”

With the IBC trophy in hand and 2020 appearances including The Chicago Blues Festival, The Big Blues Bender and the October Legendary Rhythm and Blues Cruise adding to his resume, Anchondo continues to build on a solid foundation of hard work and hard touring.

In 2017 his release, Roll the Dice,   spent 24 weeks on the Roots Music Report after his initial blues releases Young Guns in 2014 and Kicking Up Dust 2012 introduced his blues sound  to the Midwest.