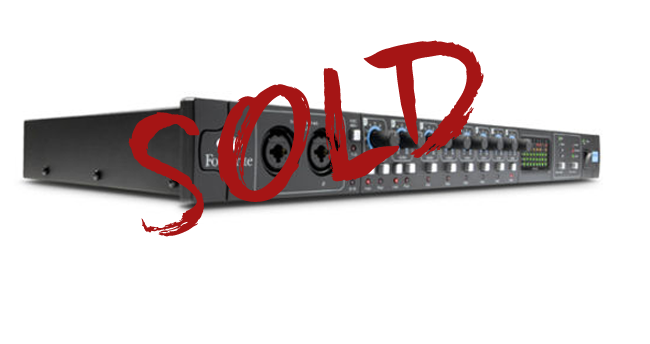 The Focusrite OctoPre MkII Dynamic is a feature-rich expansion upgrade for any digital audio workstation. With 8 channels of Focusrite microphone pre-amplification, 8 VCA-based Red 3-derived compressors and built-in 24-bit / 96 kHz digital inputs and outputs, the OctoPre MkII is equally ideal as an expansion for any analogue or digital console, or for a hard disk recorder.

The OctoPre MkII Dynamic's digital inputs and outputs let you make the most of often-neglected ADAT I/O—ideal for expanding the number of mic-pre inputs on your interface or for providing analogue monitoring from any digital ADAT feed.

With this entire package fitting into a single 1U chassis complementing Focusrite's Saffire PRO range, and all controls adjustable from the front fascia, OctoPre MkII Dynamic sets the standard for modern, compact, multi-channel recording expansions.

Focusrite has, over the past two decades, built a reputation as the market leader for high quality recording equipment, with its mic pre technology as the cornerstone of that enviable reputation.

The original ISA mic pre, as featured in the early Focusrite Forté console, is still used by many of the industry's greatest producers and has contributed to the sound of countless hit records. Today, Focusrite design equipment for a far greater audience, from professionals to amateur enthusiasts, all with varying budgets.

As with the Classic ISA mic pre used in both the ISA and Red ranges, the Saffire mic pre found in the OctoPre MkII Dynamic is designed to the highest possible standards. It upholds the same wide bandwidth philosophy featured in the original forté console, back in 1989. As with the Classic ISA mic pre, the Saffire mic pre design features custom components which have undergone an intense testing and qualification process.

With the facts and figures in, Focusrite designs then have to pass the essential listening stage. Any design can measure well on the test bench but only a great design can be qualified in the studio. The FET-based Saffire mic pre design is no exception. It delivers clarity without colouration and exhibits the signature transparency for which Focusrite have become famous.

With the high channel count interfaces (Saffire PRO 40 and Liquid Saffire 56) and both the OctoPre MkII and OctoPre MkII Dynamic, the Saffire pre-amp has been optimized for drums. The theoretical maximum level of a microphone was calculated, and the mic pre was adjusted with this in mind so as not to clip with this level present, set to minimum gain. As a result, the mic pre won't clip, even with a high output level mic right up close to a snare drum (the mic input will accept signal levels up to +16dBU from a microphone).

The Compressors featured in OctoPre MkII Dynamic are a new VCA-based, feed-forward design, derived from the celebrated Focusrite Red 3.

With just a single dial, these eight 'recording' compressors allow you to get to the desired amount of compression for each channel, fast, providing a natural but loud sound. The single dial solution decreases the threshold, and increases the makeup gain simultaneously, the result of which is a sound that gets progressively more compressed but retains a good output level.

The compressors uses a soft-knee progressive compression curve, modeled on the properties of the Red 3 compressor, and featuring a fixed Attack time of 1.2 ms and Release time of 28ms. The circuit has been tuned by ear at Focusrite and these settings were chosen after critical listening and analysis of the Red 3. Bass guitar and drums were put through the Red 3 compressor, and the threshold, ratio, attack and release envelopes were modified until the desired 'controlled' sound was achieved. These settings were then applied to the new VCA circuit where the soft knee and ratio curve had been duplicated. A further listening then helped to tweak the settings and ensure that the compressors behaved as expected.

The compressor has two modes: Normal and 'More', which let you change the behavior of the compressor to suit different instruments. Whist the Red 3 is well known and loved for its sympathetic approach to compression, it's not regarded as an 'effect' compressor. However, with the OctoPre MkII Dynamic's 'More' button, found on each compressor, you can bring a bit of aggression to your sound. The More button doubles the ratio from 2:1 to 4:1 and shifts the threshold range, so you have more sensitivity on control. The threshold is closed down, working across a smaller range, as you're applying threshold control over a much louder signal.

Compress transparently or with effect

Input clip and Compression active LEDs on every channel

5 LED input metering on every channel

Phantom power available on every channel (switched in two groups: 1-4 and 5-8)

Instrument: As above, switched to Instrument (inputs 1 & 2 only).

Switching to enable monitoring of A/D inputs or ADAT inputs with ADDA switch.