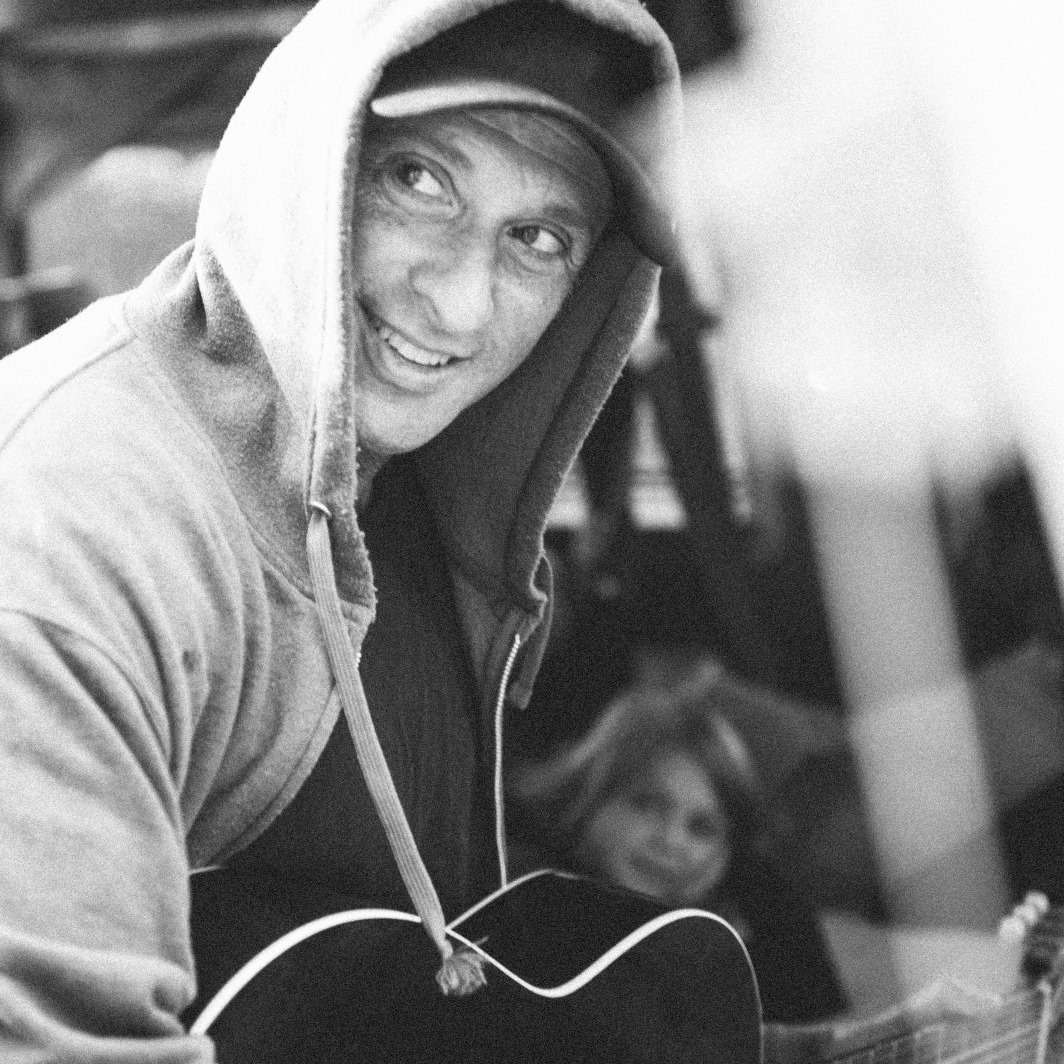 “With his acoustic guitar and a batch of witty and insightful songs, Dan Bern is rapidly becoming the voice of a new generation of folk music.”
– NPR

“Dan Bern is a throwback, a singer-songwriter who marvels at life’s beauty, fragility, and complexity with a fresh, defiantly uncompromising style. In a perfect world, he’d be as beloved as Dylan or Lennon—he’s that good!” So wrote Stereophile magazine contributing editor David Sokol for that publication’s popular Records To Die For feature several years back.

A remarkably prolific songsmith, Dan has released some two dozen studio albums, EPs, and live recordings since his first acclaimed Sony-distributed CD in 1997. Either fronting the prodigiously talented band Common Rotation or as a solo performer, he is comfortable and convincing, funny and topical, with an unassuming tip of the hat to the spirits Woody Guthrie, Johnny Cash, the Beatles, and young Bob Dylan—all while sounding thoroughly original and 21st-century. Whether writing about stepping back and appreciating the world around us (“Breathe”) or celebrating the venerable voice of the Los Angeles Dodgers (“The Golden Voice of Vin Scully”), Dan’s songs are always literary, sometimes funny, and often cinematic. And it’s not uncommon at a Dan Bern concert to see and hear fans unabashedly singing along to one song after another with no prompting
from the stage.

Dan Bern recordings have featured a host of artists ranging from Ani DiFranco to Emmylou Harris, and he’s devoted entire albums to baseball (Doubleheader), politics (My Country II), and little kids (2 Feet Tall). His singular songwriting has led to stints working on such projects as the Judd Apatow features Walk Hard—the Dewey Cox Story (starring John C. Reilly) and Get Him to the Greek (starring Russell Brand). His songs have appeared in numerous TV shows, and he recently penned the theme song for the Amazon cartoon The Stinky and Dirty Show.

Dan’s new full-length studio album, Hoody, is due in early 2015. The album was recorded primarily in Los Angeles at Pehrspace in the Echo Park neighborhood. Featuring one of his most engaging and eclectic collections of songs, with support from Common Rotation, Hoody digs deeply into Dan’s affinity for country, rock, and folk with a punch and poignancy rarely heard these days. And his voice has never sounded richer and more powerful. The record has a warm, organic feel, with the band usually performing together in the same room, at the same time. Beside Dan, who plays acoustic and electric guitars and some harmonica, musicians on the album include Adam Busch (drums, harmonica), Jordan Katz (trumpet, banjo), Eric Kufs (lap steel, vocals), Johnny Flaugher (bass), Eben Grace (guitar), and George Sluppick and Tripp Beam (drums). And Hoody was co-produced by Dan with his old friend Greg Prestopino, whose long list of credits includes co-writing Matthew Wilder’s ubiquitous Top 5 hit, “Break My Stride” from 1983. Says Dan, “The way we recorded the stuff was a bit rough in spots, and Greg was able to massage it really well.”

Hoody is filled with highlights and surprises, including “Lifeline,” a stunning up-tempo country-rocker. The song, which soberly celebrates resiliency, features guest vocals by original Old Crow Medicine Show member Willie Watson and Common Rotation lap-steel guitarist Eric Kufs, who co-wrote the song with Dan. And somehow Dan holds one particularly challenging note for 20 seconds toward the end of the song. Like the thoughtful “Turn on a Dime,” “Lifeline” would sound awfully good on progressive-country radio.

As would “Merle, Hank & Johnny,” which not only pays homage to those country icons but to Buck Owens, Jimmie Rodgers, and George Jones (and is as loving an ode as his tip of the hat to Vin Scully on 2012’s Drifter). The song is powerfully autobiographical, capped off with the sentiment that no matter what music his young daughter ultimately listens to, she’s sure to hear Haggard and Williams and Cash as she grows up.

Speaking of Dan’s little one, Lulu (who chipped in a few chirps on 2 Feet Tall) has a short but charming three letter cameo (singing “JFK”) on “Waffle House,” a hilarious live showstopper delineating one of the true dividing lines in modern-day America: “Red states got the Waffle House, blue states don’t.” On Hoody, the song barely clocks in at a minute-and-a-half, but Dan packs a lot into it. Another gem on Hoody is the harder rocking “Welcome,” a three-minute indictment of our modern-day information overload. With an infectious melody belying the song’s powerfully topical message, Dan poses the question, “What’s in your wallet, and which side are you on?” On a lighter note, there’s a charmingly spirited take on Johnny Cash’s novel 1976 country chart-topper, “One Piece at a Time.” The album closes with one of Dan’s loveliest songs ever. “Sky”— with the timelessness that graces “Soul,” the brilliant closing song on 2003’s Fleeting Days—is a heartbreakingly beautiful love song, not just to a true love, but to life itself. “Long as I can see the sky…nothing can bring me down.”

Reflecting on Hoody, Dan confides, “I feel it’s a really strong record. I think it’s got a lot of elements—old folk, classic country, British Invasion—but it all holds together. It’s the culmination of what I’ve been aiming at for a long time, and also a jumping off point for everything I’m aiming to do next. I feel like the right radio stations could find a lot here to work with. I was aiming high and knew what I was after, and with a great team was able to achieve it. I hope people will hear it.”

Hoody is fresh and contemporary, and certainly deserves to be heard… a lot. Dan is clearly standing on the shoulders of giants as he observes the world around him and puts all the bustle and the craziness into perspective. He’s a songwriter’s songwriter and a lyrical genius with a huge, optimistic heart, as anyone who’s heard his songs can attest to. (Who else could write songs as diverse and pithy as “The Fifth Beatle,” “Osama in Obamaland,” and “Year-By-Year Home Run Totals of Barry Bonds”?)

Like we said, Dan Bern is a throwback to the days of exemplary songs and extraordinary songwriters. He’s one of the very best, and we sure could use more of his kind these days.