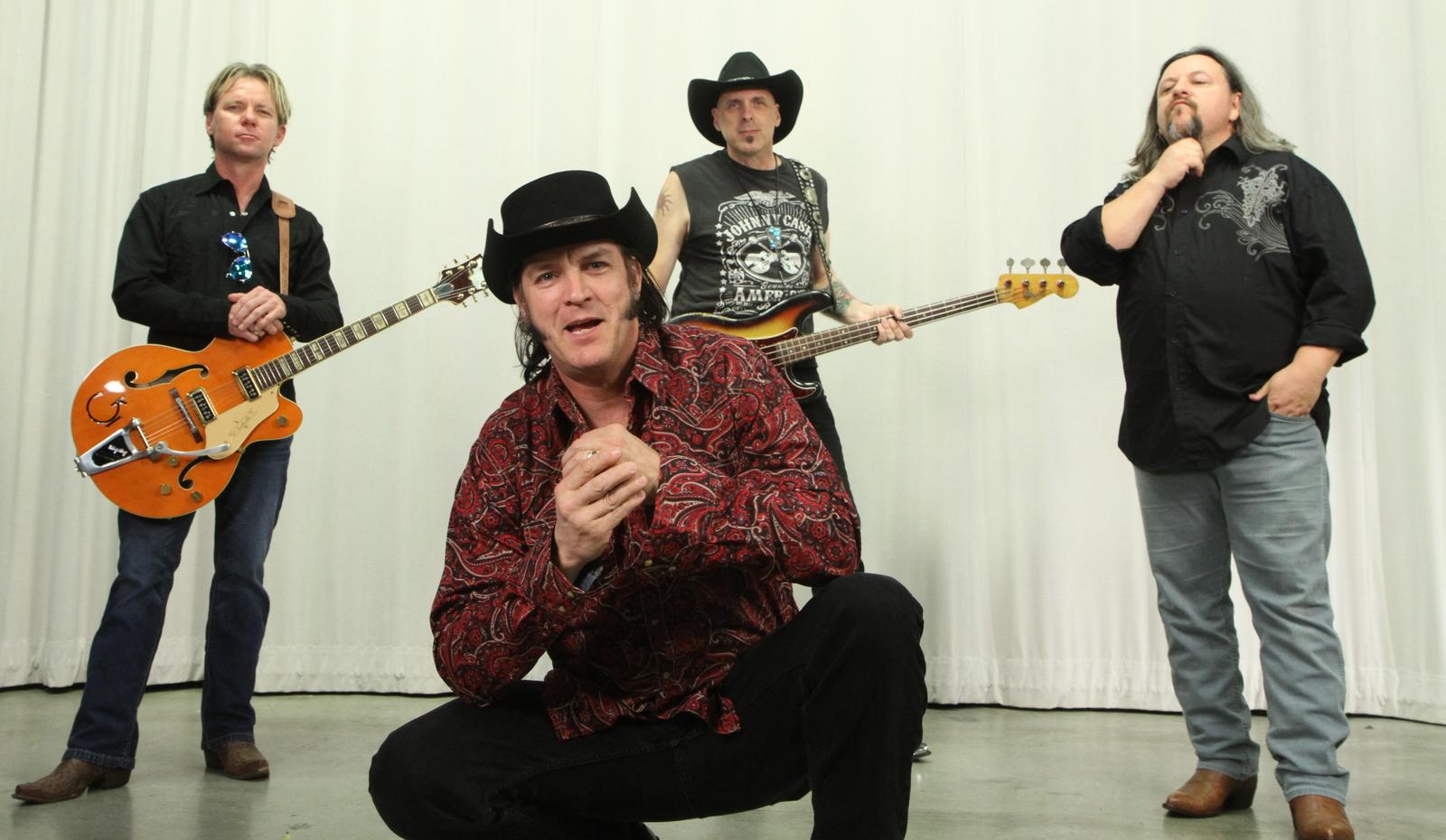 Cottondale Swamp hails from west central Florida. We are a band that revels in the old Florida vibe that is found on the back roads, small towns and swamp lands of this state. Our music is Southern Americana rock 'n roll with solid old school Country and honky-tonk sensibilities.

Our music expresses a deep love and appreciation of the roots of rock 'n roll and country music. The members of Cottondale Swamp are well traveled having explored the United States and the world as musicians, troubadours and wanderers, we have explored many places far from Florida. Those experiences have shown us that Florida is a unique place that we want to call home... more accurately Florida chose us. Florida inspired us to the write the songs for our new album.

Cottondale Swamp is currently having a great time recording our debut album. This record parties hard, thinks deeply, feels intensely, loves completely, and revels in the under belly and weirdness of the great state of Florida. We love playing live and we strive to put on a great show that engages our audience so that we are all part of the show. The new record captures the authenticity of Cottondale Swampand brings everyone along for the ride.

Cottondale Swamp and its members have shared the stage with, opened for, or played in the bands of many of our favorite artists, including: Dickey Betts, Bellamy Brothers, Artimus Pyle, Sammy Hagar, Southern Culture on the Skids, Dale Watson, Leon Russell, Cheap Trick, Dick Dale, Melanie, Gin Blossoms, Live, Avril Lavigne, Marilyn Manson, The Fixx, and more.

Kenneth Grube - Lead Vocals / Guitar - My other gig is that of an Elvis Tribute Artist. I have played music my whole life in punk bands, blues bands to Country and Western. I learned a lot when I toured with James Peterson one of last old school bluesmen. I would play drums and chauffeur him to our gigs. I also backed up the Bellamy Brothers when they were touring in the south. I would open the show playing in a band with the Bellamy Brothers' sons, and then we would be their backup band for the show. I currently perform as Elvis in my tribute show over 150 dates a year.

Chaz Winzenread - Lead Guitar - Having been raised on a farm in rural Indiana, I was taught the values and rewards associated with working the land, family, and the joy/reward of harvest. These values instilled in me by my grandfather, will never be taken lightly. Being the youngest child of a 4H beauty queen and streetwise Marine I was exposed to a wide variety beliefs, ideas, and of course music. I still recall my father listening to Carl Perkins and carrying on about how all the guys of his generation wanted to look like Elvis but sing like Roy Orbison. All the time mom was more into the country and folk pioneers that shaped American music. At the age of 10 I asked my father for a guitar for Christmas and I’m sure he thought it would end up in the family garage sale 6 months later. However after a few months of lessons and several hours of practice imitating my heroes he soon realized that he had helped me find my passion. After high school I left the Indiana farm and moved to Hollywood, California to attend Musicians Institute/Guitar Institute of Technology with my parents blessing. I recall life in Hollywood as lessons in life as well as music. Both of which had a strong impact on the person and musician I am today. After graduation I moved back to Indiana to join an up and coming rock band called Healing Sixes. I will never forget late night rehearsals in the old farmhouse with the windows open until 2 AM. Of course it did not matter to anyone because the closest neighbor was a mile away. I really cut my teeth with this band and still to this day consider them my brothers. We enjoyed a number of years of success which included recording a record with famed Producer Kevin Shirley at the Avatar (The Power Station) and Hit Factory studios in New Your City which have been graced by the names of many of music elites including John Lennon and Michael Jackson. Also, sharing some my time with Healing Sixes was drummer Jason Bonham who is the son of legendary Led Zeppelin drummer John Bonham. Playing music with Jason was a real treat not only for his lineage, but he really taught us to feel the music and not over think what you may be playing at any point. This band took me all over the world on tour which I am very thankful to be a part of. Including a west coast swing which took us from Alaska to Cabo San Lucas, Mexico where we met up with Sammy Hagar and ended up performing shows as Sammy’s backing band which was right after his departure from Van Halen… an experience that I will never forget. As they, “say all good things must come to an end” and our record deal went sour in early 2004. This is when I relocated to Florida to begin a new life and see what new music may be on the horizon. After several years of sifting though many cover and original bands in the area and wondering if I’ll ever find musical soul mates in Florida, in 2015 I got a call from bass player/song writer Michael Hoag about a new project that he had been writing music for which was old world Florida/country based and he was reaching out to some of the best players in the area. I was immediately intrigued and we promptly got to work crafting and recording these songs. This project quickly grew into a great band with strong Florida ties. We are really enjoying writing and recording this record and hope that you will also enjoy the new music. Ladies and Gentlemen… Cottondale Swamp.

Michael Hoag - Bass Guitar / Vocals  - I have been playing in bands as long as I can remember. I have a twin brother, Mark, who plays guitar. We had our first band in 5th grade. My first working bands were in the Boston area with such names as: The Young Moderns, The Underachievers, The Crosstown Rivals, Kevin and the 45's, and many more. I moved to Florida and played in the bands Barely Pink, Leonard Croon Band, The Vodkanauts, The Ditchflowers, Sara Rose Band and Mojo Bones. I've been fortunate enough to have played gigs with many of my heroes such as Cheap Trick, Dickie Betts, Leon Russell, Artimus Pyle and others. I've played bass guitar on quite a few records and I love writing songs. Now, I feel so lucky and humbled to be in Cottondale Swamp with Kenny, Chaz and Dan. This band came together organically. I had written a bunch of songs and I wanted to flesh them out and see if there was a "band in there", so I called up the some of the best players in town. We quickly discovered that we are kindred spirits who love authentic Americana music. We also all obsess on vintage gear and love the sound and mojo of an old guitar, amp and drum kit.

Trivia: My sister is veteran actress Judith Hoag, currently on the CBS series Nashville, Judith also played April O'Neal in the original Teenage Mutant Ninja Turtles movie and starred in the Halloweentown Movie series. In addition to having parts in dozens of movies, Judith has pretty much guest-starred on every major TV series in the last couple of decades.

Dan Eggleston - Drums / Percussion -  As a 10-year old in the early 1970s in Northeast Ohio, I knew I wanted to be a drummer the moment I first heard my parents listening to the rock opera album, Jesus Christ Superstar. Something about that funky rock and roll just hit me over the head.  During my childhood my family would spend weekends at a nearby campground in the summers and I recall rowing our little boat across a small lake to listen to bands perform at the Saturday night teen dances. It was common practice for me to approach the drummers after their shows to ask if they had any broken drumsticks they didn’t need.  This was so I could use them to “play” on cardboard boxes.

After a successful campaign to convince mom and dad to buy me a real drum set, I would often be found playing along to my older brother’s classic rock records in the basement of our home.  It won’t surprise you that I spent all four years in high school participating in several of the school’s musical ensembles.  Soon after graduating high school I joined my first real band, an already established and popular new wave group, Joy Circuit, playing venues around Kent State and Akron Universities.

Relocating from Ohio to Tampa Bay in 1987, a chance encounter at a St. Petersburg record store with an established local guitarist afforded me the opportunity to become a founding member of the hard rock band Factory Black. Followed a few years later with co-founding the power pop band Barely Pink.  Both Bay Area bands thrived in the energy of a fruitful local music scene.  During this time I was humbled to be asked to contribute in recording and playing live with a few other original local bands.

Then life happened.  After a healthy hiatus to focus on family, here I am…back in the saddle again with Cottondale Swamp.  The years between have brought new appreciation for music and the giants that were always there during my youth, but I had yet to discover.  I look forward to creating new music with my friends and fellow Swampers.  And if you find yourself at a Cottondale Swamp event, I hope you’ll take a moment to say “hello”.