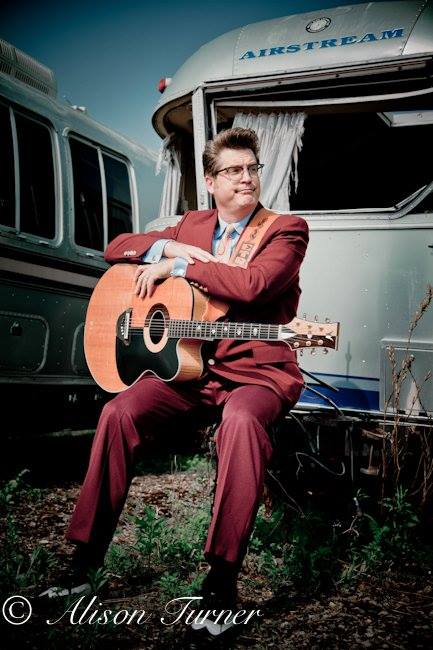 Antsy McClain brings his unique blend of music and “humor with heart” to the stage, combining his original songs with a hilarious slide show, including Antsy’s own life observations, social commentary and imaginary sponsors from his home town trailer park of Pine View Heights. As a master storyteller with the likes of PBS, NPR and TEDTalks under his belt, Antsy includes humorous and serious songs in his shows. Songs such as “One Less Trailer Here in Pine View Heights,” My Baby Whistles When She Walks,” and “The Junk Drawer of Your Heart,” are keenly humorous observations about love and loss, while his more serious songs, like “Field Trip,” “I’m Everyone,” or “Falling in Love in America,” are more akin to personal journal entries written in the act of living. It’s this tightrope walk between humor and heart that makes Antsy McClain a true original.

Antsy McClain’s newest album (his 18th), “Somewhere Past These Gravel Roads,” is a collection of songs inspired by Antsy’s roots in 1970’s and ’80’s guitar rock, and chronicles a period of great change in the artists’ life. It takes the listener on a journey that touches upon life’s darker edges but ends with the happiness of new-found love and the soul-stretching exuberance of self discovery.

Antsy McClain is one of those rare performers who can have you laughing hysterically and shedding a tear – often within the same song. In the last few years, McClain has been playing a lot of solo acoustic shows, but still plays with his band, The Trailer Park Troubadours, who bring their masterful touch to his live shows. Whether alone with his guitar, or with a group of other musicians, Antsy McClain creates an unforgettable night of music, theater and storytelling. Others have called him “a national treasure” (Modesto Bee), and “a creative force whose roots lie in songwriters like John Prine, Kris Kristofferson and Guy Clark” (Houston Chronicle), and “a happier, funnier Bob Dylan.” (his Uncle Fred). Whoever you think his influences might be, you will likely think of him as a friend after attending one of his concerts, due to his casual, approachable presentation and the relatable nature of his songs.