The Perfect Hideaway: Bringing Original Music to the City of St. Petersburg 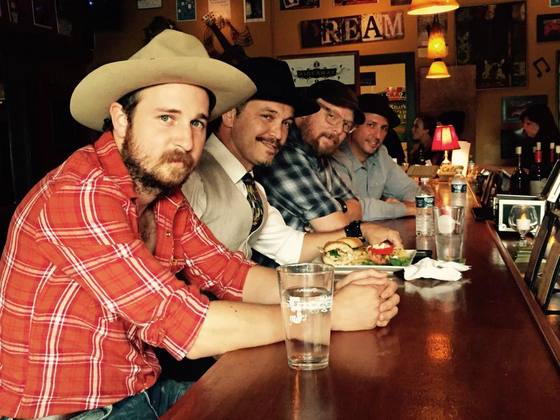 The Perfect Hideaway: Bringing Original Music to the City of St. Petersburg

In a saturated world of bars with live music, the Hideaway Café is a breath of fresh air. This Nashville-esque venue calls St. Petersburg, FL home and owner John Kelly wears many hats. John not only comes from a musical background, but a culinary one as well and he incorporates the best of both worlds in his combination recording studio, original music venue and restaurant.

John and his wife, Nicole, opened the Hideaway Café when his "homegrown recording studio" eventually outgrew the space. They took their business to a new location and turned it into St. Petersburg's Original Listening Room after realizing the quality work that was being produced in the studio essentially needed a larger stage. Inspired by Nashville's ORIGINAL music scene, the couple, who met in the famed Music City, shared belief that every city could be "Music City". It became their united mission to change the way people viewed live music in St. Petersburg.

"After all, it just takes a city to appreciate its original artists and to make them shine," Nicole says. "And those artists then have a way of defining a city and making it worth visiting. Nashville had the perfect culture of music appreciation and could surely be modeled to bring original music to the forefront in the art loving city of [St. Petersburg]."

Eventually, the Kellys turned the Hideaway Café into what it is today: "a recording-studio-music-venue-restaurant-bar" and in that order. John uses his culinary experience to build a supplemental menu to the primary-purpose: the music being created on stage. The famed Gibson - mouthwatering steak and havarti with a blue cheese/horseradish sauce served up as a lightly toasted french bread sandwich - keeps 'em coming back; and the Caprese Flatbread with its garden tomatoes, fresh mozzarella, olive oil and basil is a hit among the veggie lovers. Thin crust pizzas, artisan flatbreads, sandwiches, salads and desserts round out the menu.

"While the artist on stage and the audience come first, the food and drink are now as much a part of the Hideaway experience that we wish to share. "I just had the most delicious Gibson Flatbread with a glass of Five Rivers Pinot Noir while listening to soundcheck and thought to myself, I'm a lucky man," John says. "To put it simply, the Hideaway is built on a solid foundation of many passions and a desire to share them with the city [we] love to now call home."

Nicole cites that in the last ten years, St. Petersburg has "gone through a sort of renaissance" and people near and far know what a great place it is to live, work and play. Through the Hideaway Café, John and Nicole love to support local St. Petersburg businesses and local artists. They serve up beer from the local craft breweries and they offer up the Hideaway Cafe as a gathering place to give local artists a place to collaborate as a way of supporting local industry. Every Thursday, they host "Living Room Live", an open stage where local musicians come together and share their newest material with a very appreciative listening audience. On Fridays and Saturdays, they extend their open stage to national acts as well.

"We are all one big musical family and it's a lot of fun to pair up a national act with someone local we think is the perfect fit and someone they should get to know on their similar paths," John says.

The Hideaway Café has been able to gather some pretty big names over the years, including Noel Paul Stookey of Peter, Paul and Mary; Glen Phillips of Toad the Wet Sprocket; Emerson Hart of Tonic; and Robin Zander of Cheap Trick.

Over the years, the Kellys have built an original live music venue that not only offers great food and service, but brings together people with a deep love of original music and community.