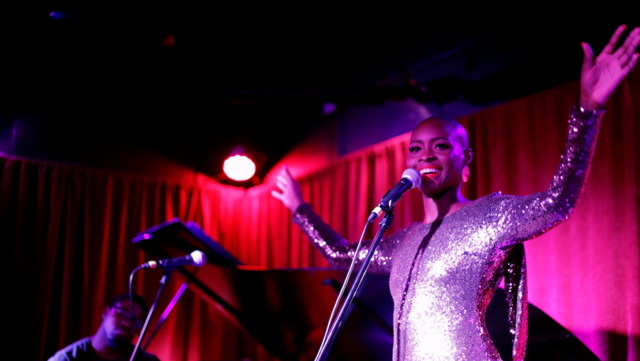 The first Tuesday of every month I make the 40-minute trip to St. Pete so I can partake in Art & Soul at The Hideaway Cafe. This monthly event, hosted by Mighty Jai Price, has been a ritual for me since he re-vamped it back in April. It brings together an eclectic mix of music and artistry from live painting to saxophonist to rhythm and blues and much more. One main stay is there is always a live band, so do not think you will be performing with a backing track on a USB.

No, at this event, you must showcase your raw talent and not hide behind technology.

Upon arriving on Tuesday, I was greeted by DJ Knox’s pulsing mix before the door even opened. The music he was spinning sounded like some Euro house funk that he skillfully mixed into 90’s R&B as I walked inside. The Hideaway Café is a gem of a spot. The stage is back dropped with lush red curtain, like out of a David lynch movie. Lighting is intimate, with reds and greens, but not overly dark where it’s uncomfortable. The vibe is set just right by the aesthetics for the type of live performances that go down.

Might Jai, in his welcoming style, comes up and gives me daps and a hug while I am waiting at the bar for my $7 glass of cabernet. He also informs me of the run-down of the acts for the evening.

First up is Siobhan Monique who steps up to the mic looking like a bond girl. With her head shaved to the skin, giant gold earrings and a gold dress that shimmers like a fish’s scales in the sunlight, she captivates me before she even starts to sing. Once she does begin her voice is as golden as her ensemble.

After her was the spoken word artist, Curtis Davis. Spoken word is a tough act; it combines poetry with the deliverance of a rapper and the stage presence of a comedian. Curtis hit all three points beautifully. His words were well intended, his thoughts carefully spoken and the audience laughed at every punchline.

The third act was the hip-hop local mainstay, Jroc Jones. He started his two song set with a joke, which I love, It shows me he doesn’t take himself too seriously. What he does take seriously his is vocal abilities. His raps were backed by the house band for the evening; Keith Russell on bass,Jabez Mitchem on keys, Caleb Sanders on drums. R&B singer Jus Henry sang beautiful hooks for both tracks, and man did it all mesh together so well.

Watch a video montage from the event here.